Infectious bovine rhinotracheitis in cats ( “cat” herpes) – a dangerous disease that affects not only the respiratory system but also the eye. Although the pathogen in the environment die pretty fast (about 12-18 of hours). However, if the virus is in the body of the pet, the animal is still many months (up to 8-9) has the ability to infect the rest of the cats. 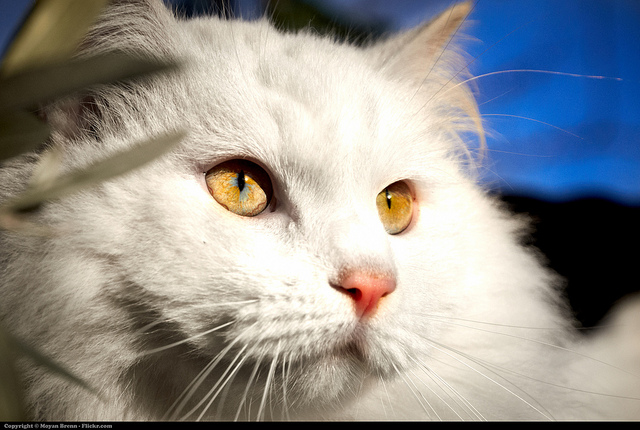 The animal may be ill

Often a cat becomes infected by inhaling the air with the agent. However it is not excluded and alimentary way of infection (when the virus penetrates the body with food). But in the air a virus enters the body of cats who are sick either explicitly or already recovered and are carriers for many months.

In the external environment rhinotracheitis virus enters with secretions from the nose, eyes, urine, feces and milk.

Your cat is not necessarily in contact with the animal, “culprit” may be you. Step on fresh cat with the virus isolation (see, a puddle of urine on the sidewalk or on the ground hardly notice) and then on the shoes will bring him home.

Your pet will sniff or lick the boots, and as a result of infection. The first symptoms appear quite quickly, and they are quite specific.

The most frequently recorded acute course of the disease. Very rarely it occurs chronically or almost imperceptibly. First observed loss of appetite, and discharge from the nose and eyes. Runny at first slightly, but before our eyes it will become purulent (yellow with a greenish tinge).

Since the virus “love” respiratory system, the longer the symptoms are connected with their defeat. It begins coughing, often audible wheezing while breathing. Over time, there is shortness of breath.

Affects and mucous membranes (visible) respiratory system (nose, throat), inflamed, red and swollen greatly, because of which the airway lumen is greatly reduced. The oral mucosa and inflamed. Because of purulent secretions in the nostrils of the animal has to breathe through the mouth.

If time does not recognize the symptoms, and time does not begin treatment, then develop pneumonia and bronchitis. Once the acute form becomes chronic, and pointed out the problems with digestion, constipation appear.

Although the animal to eat and drink would not be desirable, because of this, there is a general weakness and even dehydration. Due to the weakness of the legs begin to tremble.

Pregnant cats also have not sweet. The virus penetrates the placental barrier, resulting in pregnancy is terminated (or kittens are born prematurely and dead, or altogether absorbed, if the term is very small). Sometimes appear on the skin and corneal ulcers.

Self-diagnosis can be wrong because rhinotracheitis symptoms are very similar to feline calicivirus, chlamydia, reovirozom, mycoplasmosis . Once you have noticed that your favorite became apathetic in the eyes and nose of the pus came immediately to the clinic to the vet.

He not only examine your pet, but also make the necessary tests, will conduct a differential diagnosis to exclude ailments with similar symptoms.

Treatment of cats suffering from rhinotracheitis

Rhinotracheitis is impossible to completely eliminate the cats. Surely, you know that almost all the people are carriers of the herpes virus, and as soon as the immune system gives up the slack, then this infection right there. The same goes for rhinotracheitis.

It seems that after treatment the symptoms disappeared, but stress or unnerved immunity again “activate” the virus. Do not worry, not a disease razbushuetsya again, just your pet will support.

This poses a danger to those around him susceptible animals, especially if there are kittens. For themselves, their children and dogs do not sweat it, “cat” herpes affects only felines

It can not be treated independently. Only a veterinarian prescribe treatment. Sami did not you pick up the necessary broad-spectrum antibiotics, which will not allow pathogens to take advantage of the weakened immune cat. Be sure to apply immunomodulators to strengthen the body’s defenses.

Necessary and vitamins (especially C, A and E), which again will enhance immunity and accelerate the healing process. And of course you need to follow a diet. Antiviral drugs will greatly facilitate the condition of the animal. Often prescribed eye drops and nose, which fight infection and pain.

Prevention is simple: it is necessary to vaccinate young kittens. Once taken away from their mothers, had a preventive deworming, vaccinate complex preparation (not only from rhinotracheitis). This will allow to develop a stable immunity year long. Every year, repeat the procedure.