Urine retention in the cat Have you ever heard of a cat and a poodle? 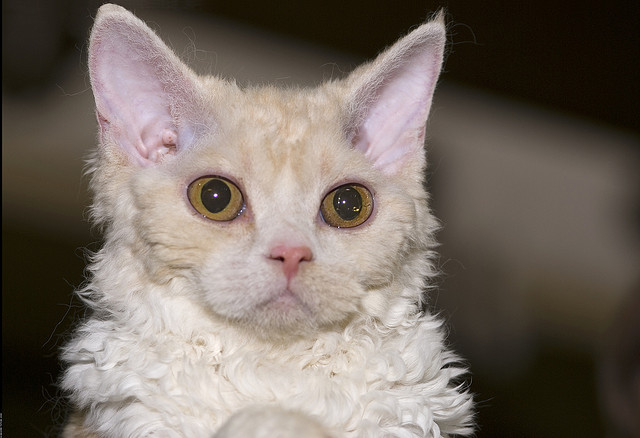 This concept might conjure up images of strange hybrids that inhabit the island of Dr. Moreau from the same science fiction novel by HG Wells!

In fact, it is the name of an unusual genetic breeds of cats.

The matter is clear that it is dark

The phenomenon of “cat-and-poodle” – not exactly a new thing. Links to pudelketa us back a few decades ago in Internet. Yet the term for a while was not claimed until relatively recently started to be used not to refer to all sorts of unique animals that have features of both cat and dog.

For a long time lovers of cats were confused by the different types of similar rocks, not knowing how to classify them. Someone thought pudelketom hybrids from crosses and reksovyh Scottish Fold breeds Cornish or Devon. Someone took for these strange animals from the descendants of the complex crossing several breeds, and not approved in Germany as an independent breed, due to difficulties in the German legislation.

Anyway, interest in these cats has increased in the late 80’s in connection with scientific research, finally shed some light on what exactly is pudelket.

Scientists from the Austrian University have uncovered the mystery cat and a poodle in published paper titled “Selkirk Rex: morphological and genetic characteristics of a new breed of cats.” It was a joint survey of the Institute of Animal Husbandry and Genetics, Department of Biomedical Sciences, University of Veterinary Medicine Vienna.

Reksoid, curly hair mutations were chosen for the development of new domestic breeds of cats. Selkirk Rex (or pudelket) is one of the last among the established breeds with curly coat. It originates from a spontaneous mutation, which was discovered in the US in 1987.

Unlike earlier, well-known Cornish Rex and the Devon Rex as a mutation curly fur, the Selkirk Rex mutation is not recessive and dominant. In this case, it manifested a very different type of curl. That is the nature of cat curly hair is the result of a dominant gene. This means that the representatives of the breed can be crossed with other cats, while maintaining the unique hair style.

At the time, scientists have confirmed that the Selkirk Rex genetically significantly different from all other known species and classified as a separate breed. It is the fourth type of “curly cats” in addition to Devon, Cornish and German Rex.

Thus, the uniqueness of the breed Selkirk Rex is that its members have very thick, curly wool on, much thicker, thanks to its three-layer. That is why a funny nickname was born of these animals, “the cat in sheep’s clothing.”

Also rare distinctive feature of them in comparison with the related short-haired breeds that still exist and the long-haired variety pudelketa and their fur can be found in a wide range of colors.

Now officially recognized as a separate breed, all pudelkety can be traced from the same litter, discovered in America in 1987.

“Trendsetter” for unusual pinstripe wool became then unexpectedly came into being the only cat in the litter. Bearer of a new mutation with unprecedented thick, beautifully coiffed curls, interested breeder of Persian breed Jerry Newman. She decided to keep this line of cats, pairing them with the Persians.

New breed she christened Selkirk after his stepfather, making it unique in its kind, is named after a person. A founder of an unusual group of cats Jeri Newman called “Miss DiPesto”. His name famous cat owes heroine of the television series Agnes DiPesto, which starred Bruce Willis and Cybill Shepherd.

The main advantages of Selkirk Rex

In addition to its unique appearance, Selkirk Rex – calm, peaceful animals. After all, they are usually bred not only “in itself”, but with the good-natured Persian or British Shorthair.

In addition to these advantages, they are playful and obedient. Very much like the comfort of home, but do not give up nice walks. These cats must be space to play and run, but just as easy to tame them to walk on a leash.

It was only then that they moult, making them less popular compared to other breeds Rex against allergies.

There are some genetic diseases to which this breed is more prone than others. But there are also tests that help detect the disease.

Since the crossing schemes Selkirk rex Persian involved, there is a danger of occurrence of polycystic kidney disease. It usually appears towards the end of life, so choose small pudelketa need to have a reliable breeder who keeps the disease under control.

From British Shorthair pudelkety inherit a genetic disease, such as hypertrophic cardiomyopathy, which also exhibit the appropriate tests.

Selkirk rex – active and generally healthy breed, despite the fact that its external merits it owes mutations. Love of movement and attachment to family members, especially to children, allowing pudelketu overcome such problems inherited as a predisposition to obesity. And brings with what incomparable happiness of communicating to all those around them.

Urine retention in the cat