Carrying out the Schirmer test in dogs and cats: study features

Why the dog around the eyes can drop hair Japanese Spitz – tiny dog ​​with an elegant exterior, admire the beauty and grace. The snow-white fluffy fur coat distinguishes the “Japanese” from other Spitz and friendly, balanced character makes them wonderful companions and pets.

Japanese Spitz (Nihon Supittsu) were withdrawn in the country of the rising sun in the 20-30-ies of XX century. Progenitors of the breed are considered dwarf German Spitz with a white color, which at that time were brought to Japan and conquered the locals unusual appearance. Japanese breeders began to work on the improvement of the breed, with the result that they were able to get a brand new kind of dog. the first breed standard was approved in 1948.

Japanese Spitz miniature different and proportional to bundle and almost square format (ratio of height at withers to body length 10:11). Growth of males at the withers – 40 cm, weight – up to 10 kilograms. Females are smaller: height – 35 cm, weight: – not more than 7 kg.

The main wealth of the Japanese Spitz – luxurious snow-white hair. Other colors (black, red) are not allowed. Gray or peach markings are considered a serious fault. The undercoat is a rich, soft and fluffy. It forms a thick coat collar fluffy luxury, a frill and panties. On the front side of the legs, ears and muzzle hair short.

Japanese Spitz – extremely healthy breed, with no significant genetic abnormalities. Life expectancy varies from 10 to 13 years with good care can live up to 16 years, which makes it possible to classify them to centenarians.

Puppies are usually born healthy, but the breed has a weak point, a sort of Achilles heel – the eye. Congenital increased sensitivity of eye leads to the development of such dangerous pathologies, atrophy or degeneration of the retina, entropion and ectropion, cataract, glaucoma. 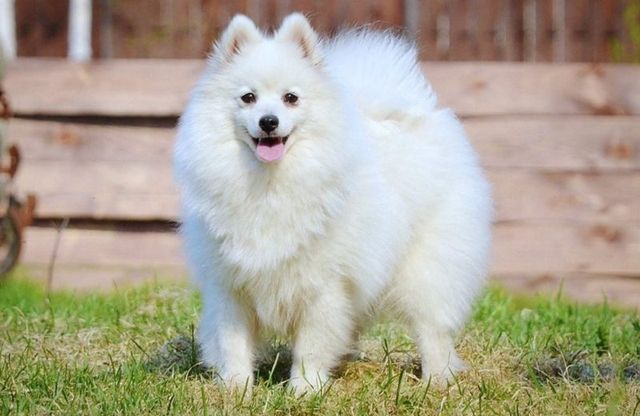 To avoid this problem, you should regularly inspect the eyes, especially after a walk, with redness wash chamomile tea or broth.

Severe genetic defects in the Japanese Spitz is epilepsy. The disease is diagnosed in dogs under two years. Spitz with such a diagnosis are not allowed for breeding.

Like many other breeds, the Japanese Spitz is diagnosed hip dysplasia. Outwardly, this pathology is hardly noticeable because of the miniature size of dogs.

In adult dogs can cause serious digestive problems – volvulus. That is why Spitz should be fed no more than 3 times a day, and the portions should not exceed the palm.

Hereditary hormonal disorders associated with the thyroid gland and the adrenal glands, diagnosed infrequently. Diseases of this nature are not treated, but the possibility of adjusting the state of health with the help of hormones.

Spitz allergies are not affected. Older dogs may develop cancer in high-risk groups in which race had similar pathology.

It would seem that in order to maintain a luxurious white coat Spitz in good condition will require a lot of effort. However, representatives of this breed are very clean and the peculiar smell of the skunk they do not. Their coat has a particular outer layer of guard hairs, whereby dirt can be easily removed. Dog how to shake off enough after walking, and snow-white fur will again.

To prevent tangles, woolen cloak should be brushed twice a week with a soft massage comb. During molting (twice a year) it should be done more often and use a Slicer. Comb pet’s need with the utmost care. Soft undercoat must be removed completely to avoid the development of dermatitis, eczema, wet and unpleasant odor.

Bathe your dog does not need more than 1 time in 2 months, using a mild shampoo and conditioners that contain in the oil. Coat Spitz dry, and frequent water procedures using harsh shampoos can damage the coat, cause itching and skin irritation. 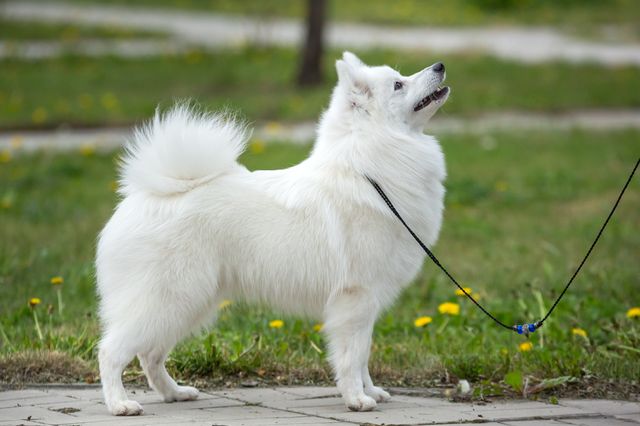 Spitz – moving dogs, so they should be to walk every day and give the opportunity to run around without a leash. Duration of walking – at least 30 minutes. In cool weather in the dog, it is desirable to put on warm overalls.

Japanese Spitz – unusually cheerful and friendly dogs that get along well with all family members, in particular – with the children. To master tied, but delicate and do not exhibit obsessions. The main thing for Spitz – always stay in a person’s field of view, otherwise it will be very lonely.

In Spitz, there is one feature of the character. Getting used to everyone’s adoration and admiration, they gradually occupy a dominant position, deftly manipulating the people in their own interests. To avoid this, the puppy immediately to explain who is the real master of the house.

But other than that Spitz energetic, lively, friendly and totally non-confrontational. However, they are laconic and show his voice is extremely rare.

Special training dog, as well as other lapdog, not required, but these clever animals are able to learn a few simple commands.

Japanese Spitz – a very popular and demanded rock. Buy a purebred puppy is not so simple, and it should be done in a specialized nursery with a good reputation, not on the market. The breeder will provide the purchaser a contract of sale, puppy metric and other documents certifying the purebred puppy.

Spitz on prices start from 30000 rubles. The higher the exterior grade, the greater the cost.

Pure-bred kids should have a snow-white coat, dark eyes, buttons and trim erect ears. The take-home fluffy ball can be 1.5-2 months. 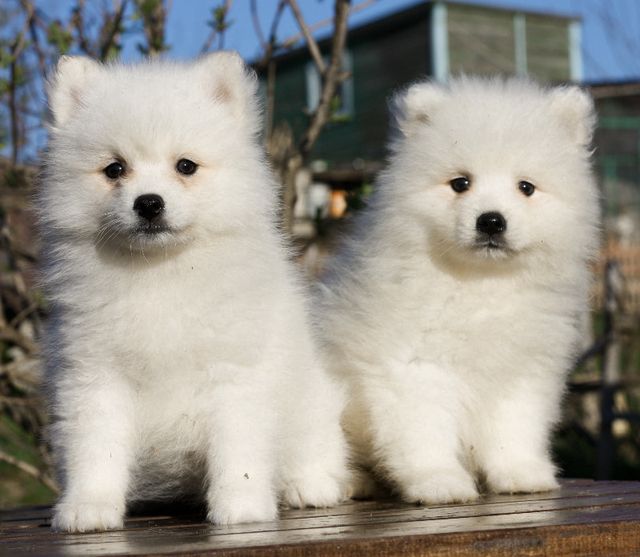 The advantages of the breed include good health, friendly and sociable character, charming appearance, simplicity of maintenance. There are also disadvantages: profuse shedding, the need to buy winter clothes and, of course, the high price.

Carrying out the Schirmer test in dogs and cats: study features

Why the dog around the eyes can drop hair